These claims were read out by the activists during the occupation on 25.10.19. They were taken up by numerous media agencies. 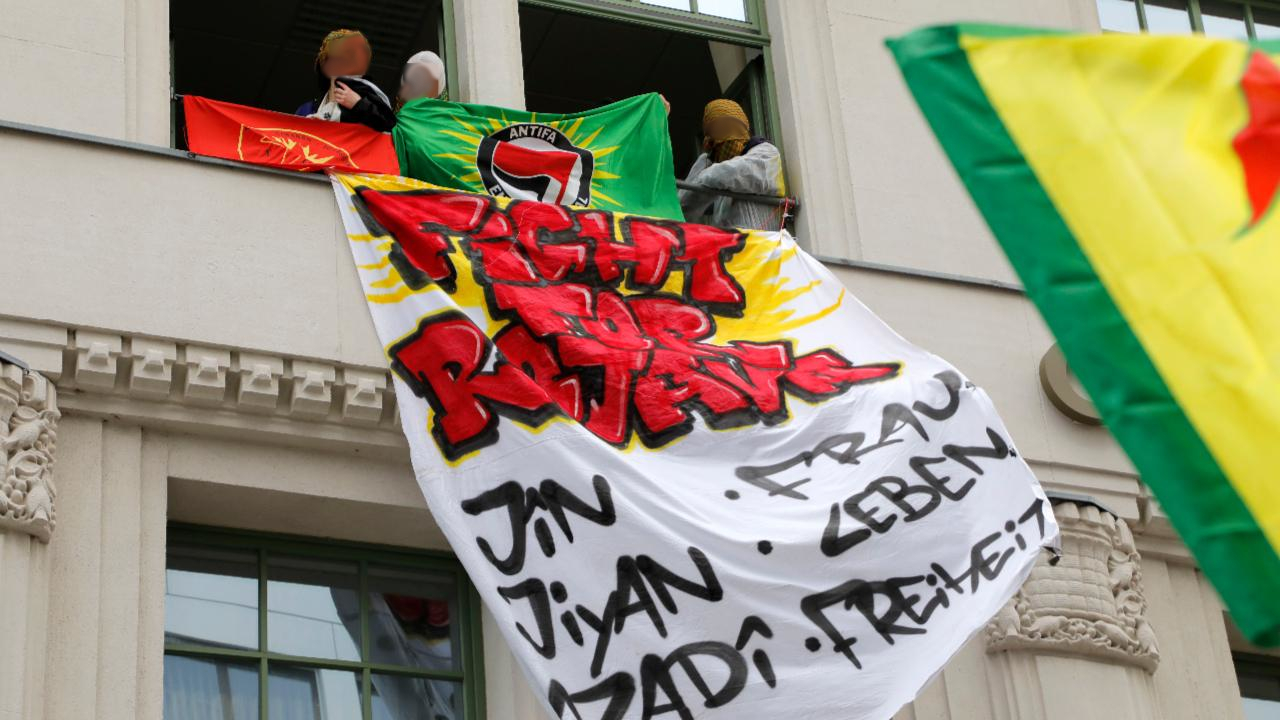 Internationalists at the window of the CDU office

CLAIMS TO THE INTERNATIONAL COMMUNITY

1. We demand a broad, intensive and earth-shattering solidarity with Rojava!
We call for a comprehensive defence of the people in Syria and the unique
revolution in Rojava.

3. We demand the immediate cessation of all measures that establish a
Turkish-Russian occupation zone at the border of Syria and Turkey.

4. Because of the threat posed by ISIS and other jihadist militias allied with turkey
to the established population and the international society, we demand for a new International Court of Justice solely founded to prosecute ISIS jihadists who are in the hands of the SDF or who fled during the Turkish invasion.

5. We demand the complete cessation of exports of arms and war technology to the Turkish state, as well as to its allies in war and governments that support the Jihad from all states and defence companies worldwide.

6. We also demand the immediate cessation of all political and economic cooperation as well as trade relations with the Turkish state and the
economic elite loyal to the AKP-MHP.

7. We demand the consistent boycott of Turkish Products, services and
institutions from the population. Accordingly, we demand society to refrain
from traveling to Turkey.

8. We call on the governments to regard Turkey as an insecure travel destination.

9. We demand all international agents to live up to their responsibility with sanction against the fascist AKP-MHP-regime because of its belligerent extermination rage against ethnic minorities, genocide and violations of international conventions. Furthermore, we demand the timely conviction of commanders of the Turkish invasion by the International Court of Justice for war crimes of systematic annihilation of the civilian population in Rojava.

10. We demand a UN resolution against Turkey because of the violations of
human rights, martial law, international law and the Geneva Convention.

11. We demand an immediate cessation of the European Union’s accession negotiations with Turkey and the associated financial subsidies from the
EU to the Turkish state.

12. We demand the cancellation of the „refugee deal“ of the German Federal Government together with Turkey with all its conditions and services as well
as the unconditional admission of all refugees from the Turkey, Syria and
every other country!

13. We demand an immediate stop of deportations by the German Federal Government and by the EU to countries of origin like Turkey and Syria,
as well as all other countries.

14. We insistently demand the withdrawal of the more than 3000 MIT
employees stationed in Germany.

15. We demand the lifting of the ban of the PKK issued in 1994 by the German Federal Government and the decriminalization of Kurdish flags and symbols, Kurdish culture and events!

16. We demand the immediate cessation and historical revision of the
prosecution of Kurds and other groups of people who perceive themselves
part of the liberation movement.

17. From the bottom of our hearts, we demand the immediate release of the 70 years-old prison inmate for 21 years in almost complete isolation – the leader
of the freedom movement in Kurdistan – Abdullah Öcalan!

18. We demand the release of all political prisoners in Turkey and everywhere!

19. We demand from the CDU/CSU their immediate impeachment and
expulsion from the party for all their members, who have in the past and
present demonstrably supported Turkish fascists, were active in Turkish
nationalist associations or maintain connections to other Turkish fascist organizations like the Grey Wolves or DITIB.

Stop the massacres! Stop the war! Stop the genocide!